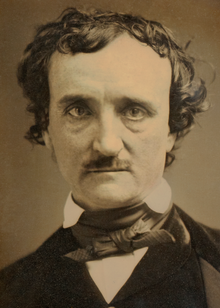 Edgar Allan Poe is perhaps the most famous horror writer who ever lived. Like Ambrose Bierce after him, Poe's work was only equalled by the tragedies in his life and the strange circumstances surrounding his untimely death.

A Bostonian, Poe has had a huge influence on the literary world. As great a poet as he was a writer of short fiction, Poe was a trendsetter and helped to create several different genres of literature. His creation Dupin, who appears most famously in Murders in the Rue Morgue, is the archetype and template for every great detective who has followed him, including a little known intellectual by the name of Holmes.

As a horror writer Poe focused on atmosphere and a pervasive sense of melancholy which is laced throughout his works. Madness is a key theme, as is mankind's obsession with death and the beyond. Poe detested allegory and didactic where a writer preaches meaning to the reader, but he did believe that great literature should possess an undercurrent and depth of meaning, while works which had too obvious a purpose or blatant symbolism should barely be considered as art.

Edgar Allan Poe was a fierce critic, so much so that in the aftermath of his death one of his aggrieved fellow writers perpetuated the myth that Poe was a drunk and a tortured, almost deviant soul. Poe was no such thing, but he was one of the greatest writers of his time and has continued to move, frighten, and disturb readers for nearly 200 years after his death.